The Waitangie Cup is a longstanding annual challenge that takes place between Middle Harbour Yacht Club and the combined clubs on Port Phillip, Victoria. The format is;

This year the excited MHYC crews who flew to Melbourne, carrying the prized trophy were Garth Riley and his “Sirius” crew, Patrick Delany and his “Powderhulk” crew and Geoff Charters with his “No Friends” crew.

Saturday dawned bright and beautiful (unusual for “sunny” Melbourne) with light Westerly winds predicted to clock to the North over the day. After a hearty Victorian breakfast the crews assembled at the Safety Beach Sailing Club for the highly anticipated boat draw, with everyone hoping to get the “gun” boats in the fleet, based on reputation…

The draw went as follows: 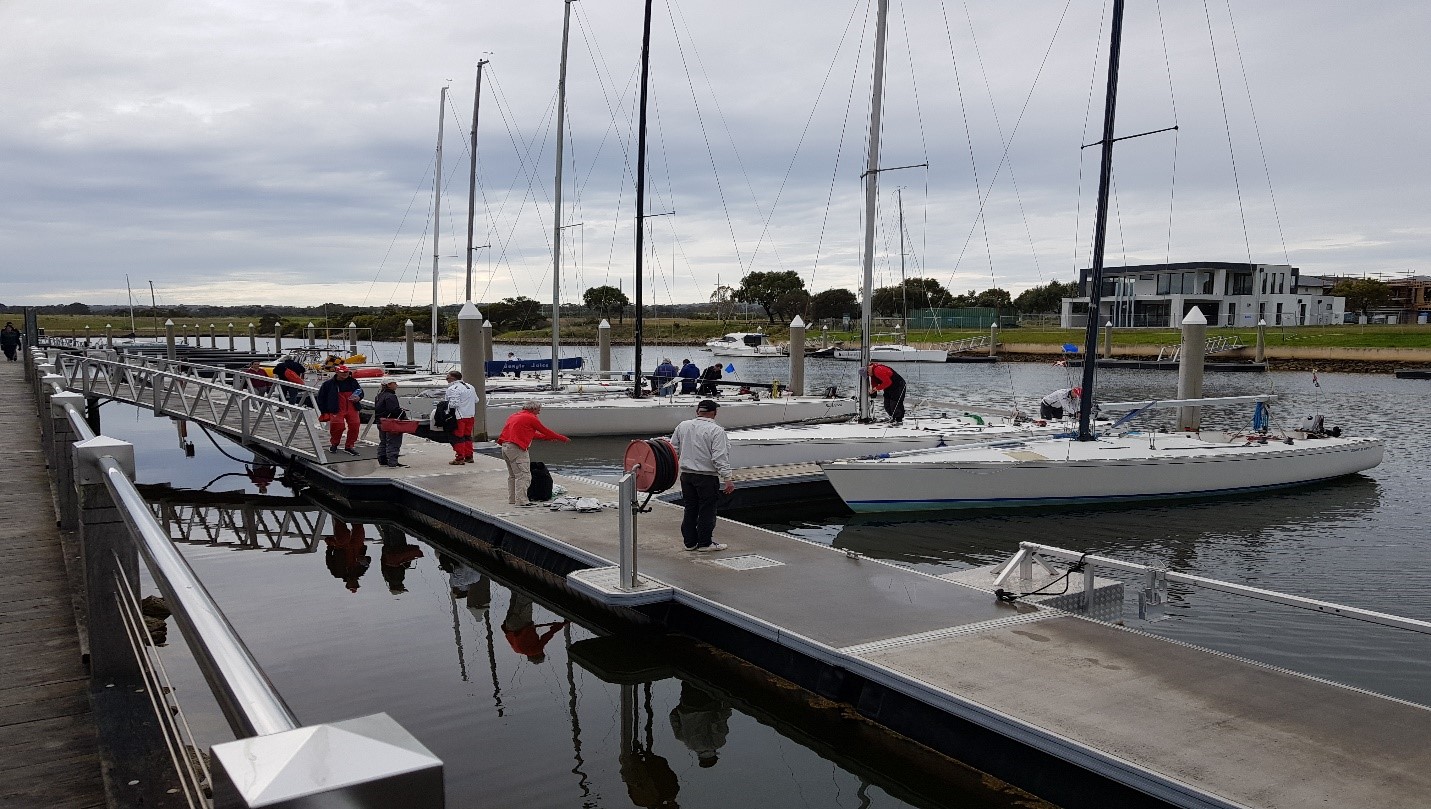 Figure 1: Crews starting to inspect and tune their boats

Geoff Charters (MHYC) – One out of the Box

At the end of the draw, the locals were delighted and the visitors slightly nervous with their boat allocations!!

After a frantic hour and a half of new boat familiarization, sail selection and boat tuning, the first race, under the capable stewardship of Race officer Geoff Eldridge, got underway promptly at 11: 11:30! The winds were light and shifty on unusually flat waters on the Bay. Picking the shifts and getting lucky, Geoff charters and Garth Riley managed to pull away from the closely bunched fleet to record a 1 – 2 for MHYC, with local boy Ken Douglas taking out 3rd spot for the Victorians. Will Sheers, Patrick Delany and Dougal Watt filled out the last three places. 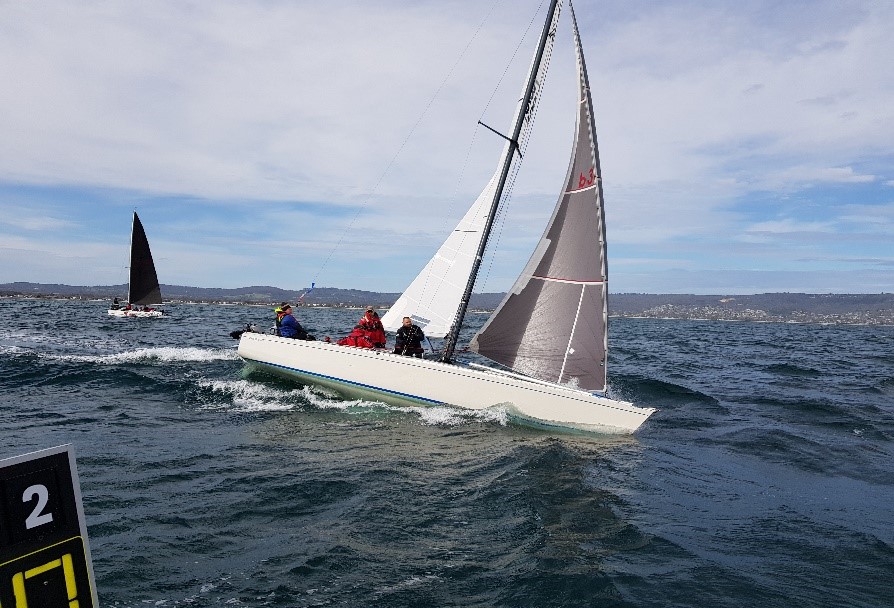 Figure 2: Checking out the start line

In a tightly contested start, the three Victorian boats dominated the boat end. Some aggressive pre-start luffing by Dougal Watt, closed the door on Geoff Charters, which sent him around to be last over the line. However, the Victorians failed to lock out Garth Riley, who snuck away from the middle of the line to sail clear and fast to take out the win, chased by Ken Douglas in second and Will Sheers for third spot. The minor placings were Dougal Watt 4th, Patrick Delany 5th and Geoff Charters 6th.

A clean start to race three saw a tight boat on boat tussle to the top mark, with Will Sheers leading Geoff Charters by a whisker. A mistake there left the door open and One out of the Box managed to turn on the inside and snatch the lead, ghosting away to a win, chased home by Patrick Delany in second, for their best result for the regatta. Consistent Ken Douglas took out third spot, with Garth Riley in fourth. The minor placing were filled by Doug Watt in 5th and Will Sheers in 6th place. 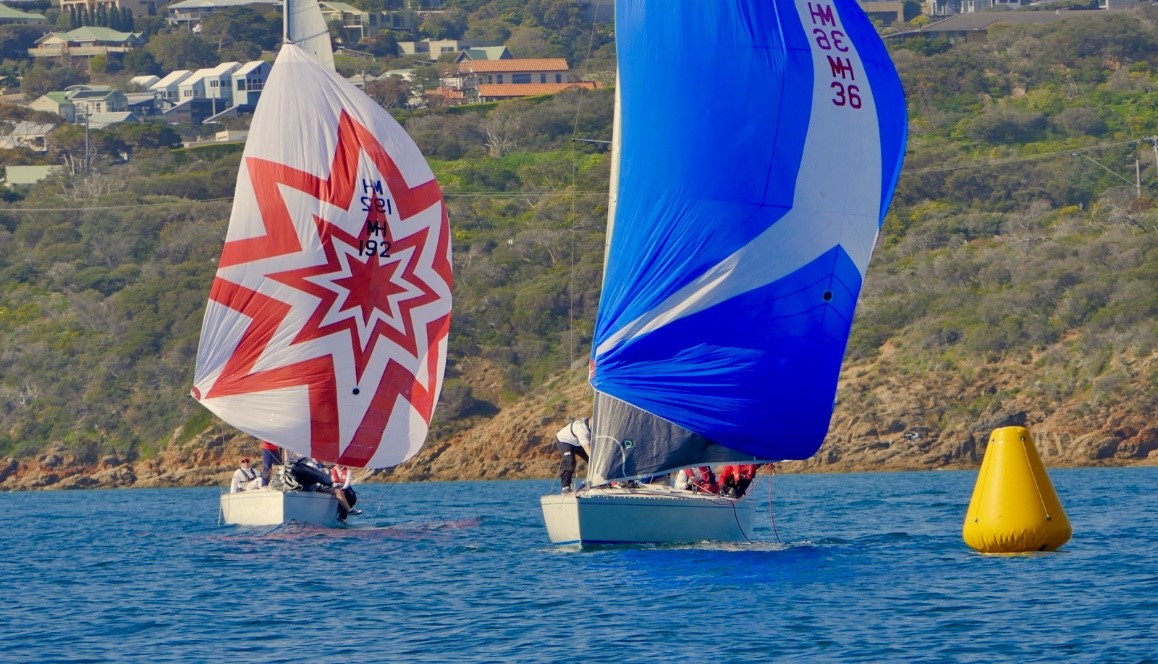 Last race of the day and it saw Will Sheers and his team hit their straps to sail away to a convincing win, followed by the ever-consistent Garth Riley in second. A closely bunched fleet saw the other places filled by Ken Douglas in 3rd, Geoff Charters in 4th, Patrick Delany 5th and Dougal Watt 6th. 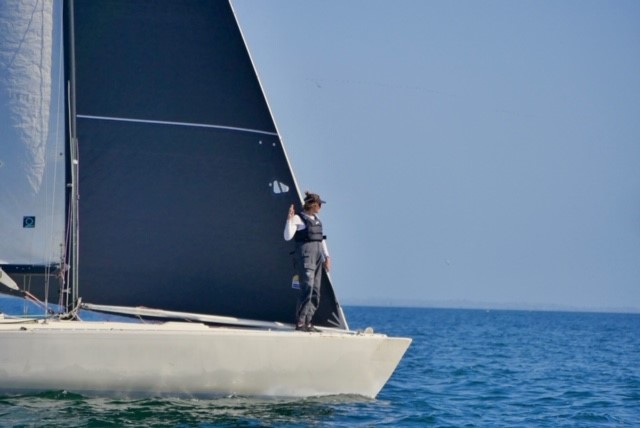 Figure 4: Pensive on the bow at the start

The changed conditions threw the MHYC teams off balance, while the locals reveled in their “familiar” conditions. The racing to the first top mark was close with three boats rounding close together and flying downwind. Delight for Victoria and Disaster for MHYC at the bottom mark as Will Sheers rounded cleanly and went on the win the race, while both Patrick Delany and Geoff charters went “kite flying” when their halyards jammed on the drops! The rest of the fleet sailed through for a comprehensive Victorian race victory, making the competition very tight, with MHYC holding a slender 1-point lead going into the final race. 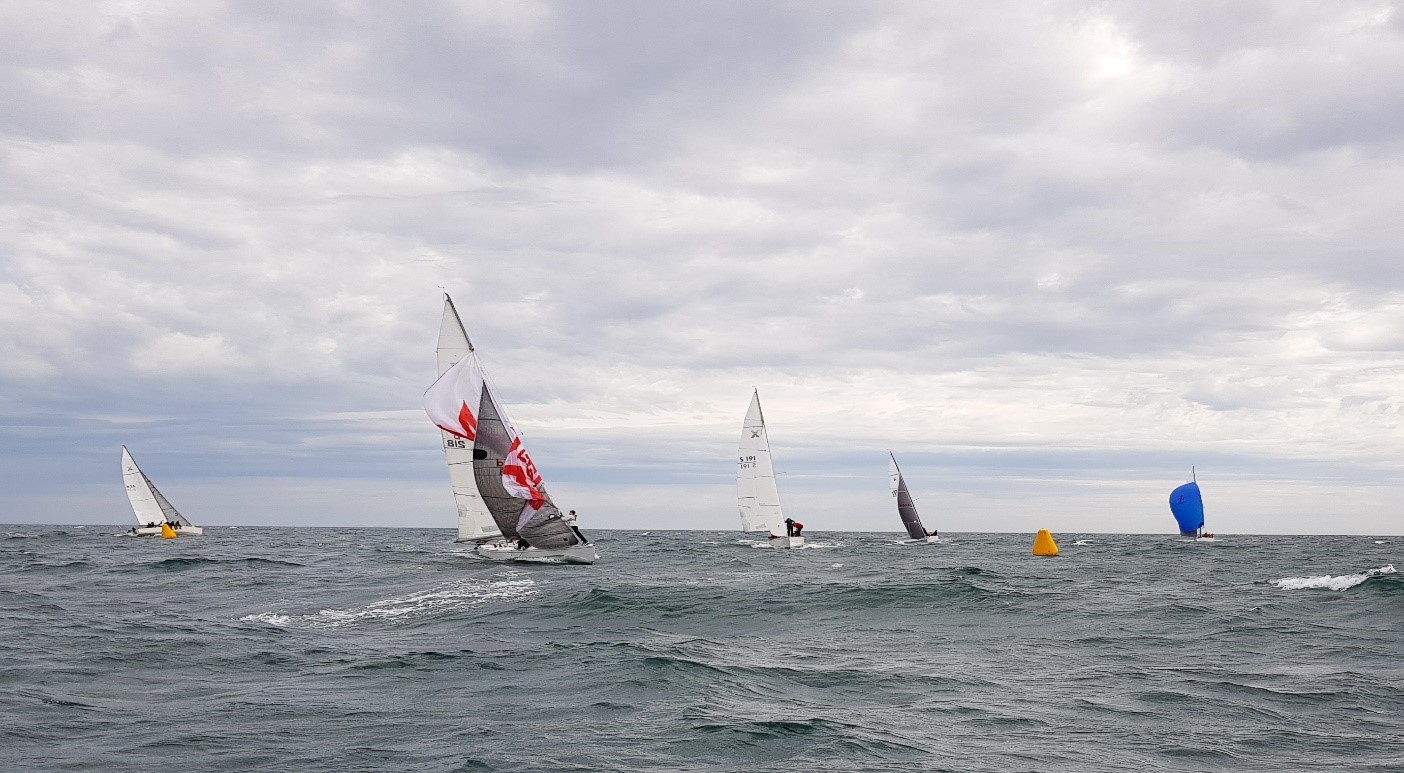 The final race of the challenge and the Victorians’ tails were up and the MHYC team were nervous!

A cracking start by the whole fleet made for a close race to the top mark. Will Sheers on Bo Derek got there first, with Geoff Charters in One out of the Box hot on his heels and Garth Riley in Salamander III in third. Some exciting downwind sailing with waves being caught saw the fleet bunch up and the leading opening and closing as different boats got onto waves. Fast finishing Will Sheers 1st held off Geoff Charters 2nd and Garth Riley 3rd for a third consecutive win. Patrick Delany held on to 4th spot to deny Ken Douglas 5th and Doug Watt 6th, to finish a close fought last race.

The overall results were: 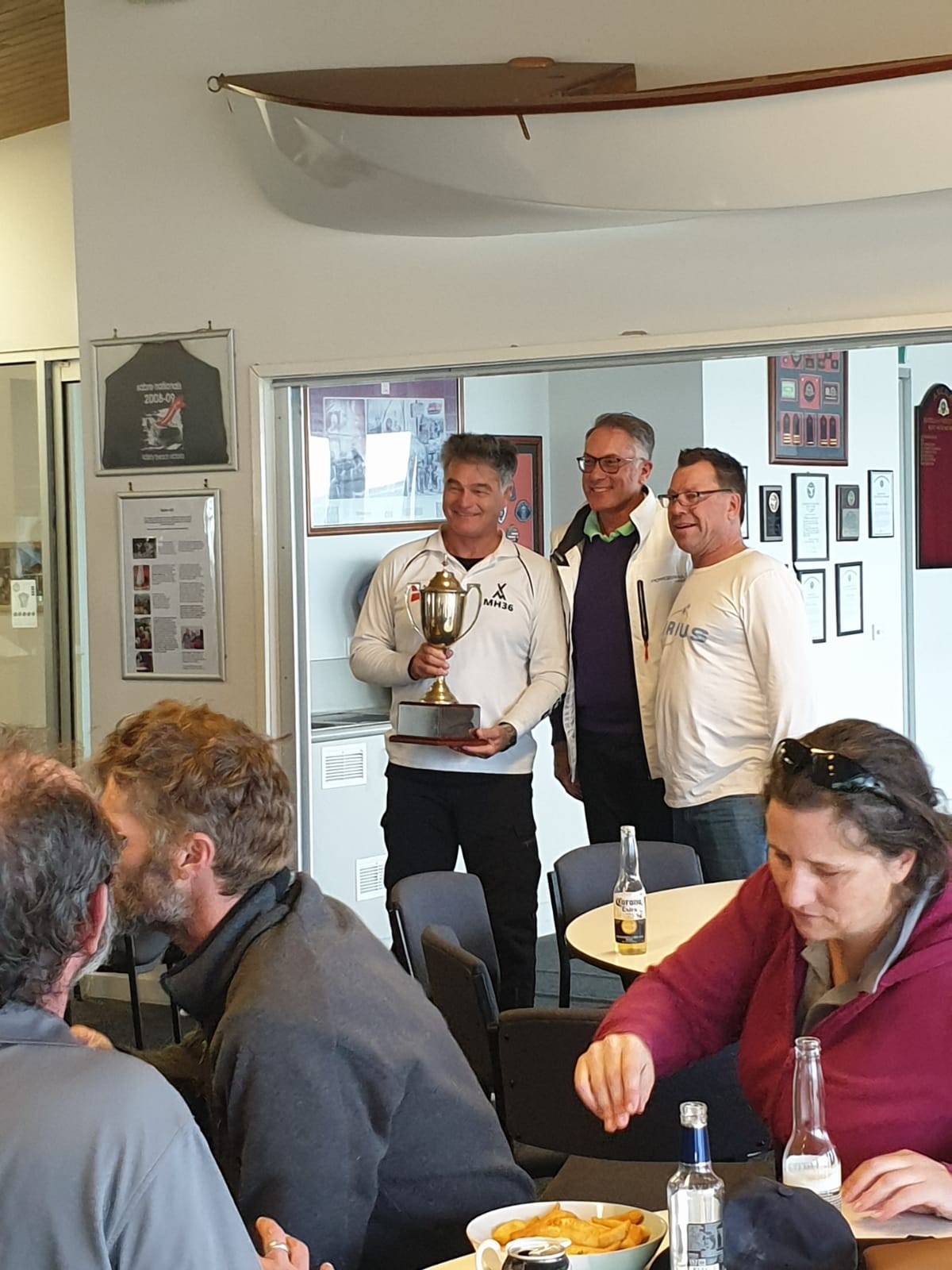 This weekend showed once again the beauty and strength of Adams 10 One Design racing, with keen and competitive older sailors being joined by younger sailors, like Victorian dingy champion Dougal Watt (a several times national champ in Impulses and Lasers) and Will Sheers, (successfully campaigning his 29er).

The Adams 10 Association wishes to thank the Safety Beach Yacht Club for hosting the Waitangie Cup, the race officer Geoff Eldridge and protest committee Chair Geoff Searle (who fortunately wasn’t called upon for any protests) and the owners of the Adams 10’s that were loaned to the crews, which made the event possible.